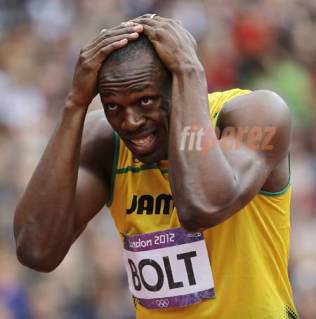 Hi there guys!  I’ve missed you bam!😍  You’ve missed me too? .. I know!!! 😁
Anyway, you guys know I’m a Christian and my faith is such a big part of who I am. You see lately, ever since I really got down to study the word of God, I have felt this innate desire to share it but I just didn’t know how until a wise man told me to do it the best way I knew how. For me, that is writing and humour. So I have combined these two elements and created this first  of what I hope will be  a thread of posts. I pray you enjoy it and more importantly, are blessed by it. 😊

So over the past few years, until the last Olympic Games, one of the issues that had sparked an endless stream of debates was the man who was faster than Usain  Bolt. Me de3, I have always maintained a default stance. I was *#TeamBolt* all the way until I read a shocking thing in the 19th chapter of St Luke’s gospel that got me going like “whaaaaaaaaaaaaat! “
So it turns out, Usain Bolt’s speed is contestable! Now before you start to freak out, Charley chill,  grab a coke and peep this…

So the thing noooor, Jesus was a superstar! I tell you!  Everywhere he went, a crowd accompanied him and I’m not talking the three kind. 😁 I’m talking the 5 and 6 digit crowd level things ooo. Some came for healing, some came to hear his “hard sayings “, some came to see who “this new dude was”. Others just came cause they had spent decades of their lives studying some mfe3 kojo hoho books and wanted to test Yesu!(they failed miserably by the way 😂)

These among a myriad other things did people come to see Jesus. There was a short man who had heard about Jesus. He was super fine fine rich.
I mean the guy had everything that made life comfortable in those days. The finest donkeys, the dopest agbada suits and whatever passed for an IPhone in those days and yet chief among his cares in this world was his intense desire to see this “Jesus dude “.

His name was Zacchaeus and he was shooooort! Sake of his height and the huge crowd, this man couldn’t see Jesus when Jesus arrived in his town. So, “he ran ahead of the crowd ” and climbed a tree!  Now isn’t that shometing!
The man premeditated where Jesus was going to be and ran like a mad dog ahead and when he got to where he was going no, he didn’t stop ooo, he CLIMBED  a tree distin!

I don’t really know a lot about Usain Bolt but tell me if I’m wrong, does not he run on a course that ‘others’ have set?
Well, blaaa Zach set out his own path and run like shometing and for that, charley I say Bolt ain’t got Jack on him!

Let’s not forget ooo, Zach was rich which makes his running no kraaa unusual. Imagine seeing Dangote or H. E Nana Addo running seriously in broad daylight just to climb some tree to see some ‘guy!’ What would people say?  And yet Zaccaheus let go of his pride, he let go of the ‘if’s‘ and ‘because’s‘ and ran to see the beloved Lamb of God. And do you know something quite interesting?  As Zach was perched on the tree like some Abuburo keenly feasting his eyes on the sensational sight of Jesus, The Way got there noooor and was like, ” oga Zach, abeg shun the tree levels and drop down for today today I go perch for your house joooor!!! “
Imagine how Zacchaeus felt that instant?
I’m sure his heartbeat alone could suffice for a sunsum *S)re bass drum!*😂
He felt he was looking for Jesus but all that while Jesus was coming to him. The book of Hebrews says *the Lord rewards those who diligently seek Him* and for that day, salvation came upon Zach and his household! Brethren and charleys assembled, what are ya still waiting for? Abeg seek the Lord and live 3333!

What people are talking about!